Portugal’s second largest city is built on the banks of the River Douro. Atmospheric Porto is a commercial port with a centuries-old history and a rich cultural heritage. 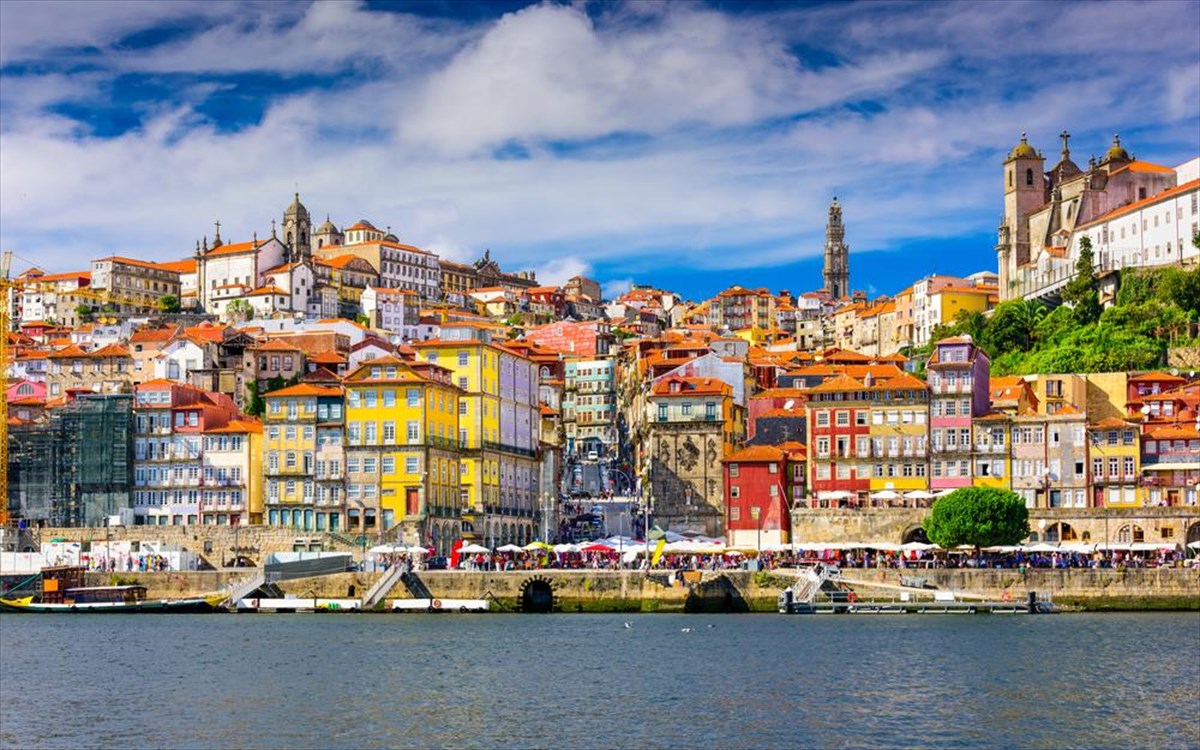 The birthplace of the famous red wine Port impresses with its medieval historic centre with its neoclassical mansions and baroque churches.

The colourful old quarter of Ribeira, a UNESCO World Heritage Site, and modern museums such as the city’s Museum of Contemporary Art and the photography museum housed in a 1792 building that served for decades as a prison are worth a visit.

Portugal’s second largest city is built on the banks of the River Douro. Atmospheric Porto is a commercial port with a centuries-old history and a rich cultural heritage.

The birthplace of the famous red wine Port impresses with its medieval historic centre with its neoclassical mansions and baroque churches.

The colourful old quarter of Ribeira, a UNESCO World Heritage Site, and modern museums such as the city’s Museum of Contemporary Art and the photography museum housed in a 1792 building that served for decades as a prison are worth a visit.

One of the city’s most iconic monuments, the Clerics’ Tower offers panoramic views to anyone who climbs its spiral staircase of 240 steps.

The church of St Francis dates back to the 14th century and it is said that over 400 kilograms of pure gold cover every inch of the church. Porto’s railway station is home to thematic murals depicting historical battles in Portugal made from 20,000 azulezos, the traditional tiles found in every corner of the city.

The traveller will tour Porto by vintage 1872 tram – museum and get a close-up view of the huge gilded ballroom of the neoclassical palace in the Old Town, which for years housed the old stock exchange.

Lisbon, as the capital, steals the show, but Porto is the perfect city to feel the authentic Portugal, with its colours, history and beauty.

Along the estuary of the river Douro, in the north of the country, Porto introduces visitors to Portugal in the most authentic way, through a city that is the second largest in the country and lacks nothing in terms of beauty. At the same time, it is one of the oldest European centres and has been on the UNESCO World Heritage List since 1996. All this together, plus its beautiful sights, we think it’s enough to start saving the 200+ euros we need for our airfare.

What to see and do

A city and its sights certainly can’t be exhausted in the 5-6 days we usually spend on a trip. But let’s see how we can get the most out of a trip to Porto, even if travel days are scarce.

A walk on the river

Although when a city is built along a river, inevitably the walks will inevitably take you there, however let’s prepare you for what you’ll see: traditional buildings in different colours with flowers on their balconies that make up a landscape of paintings, tourist spots for coffee and of course endless promenade in all tones, from romantic to playful.

Passing by the Dom Luís I Bridge

Completed in 1886 by a student of Gustave Eiffel (yes, the surname is no coincidence), Teophile Seyrig, this is the bridge that connects the city of Porto to Vila Nova de Gaia. The upper part of it is for pedestrians, with the metro passing through and the lower part is for vehicles. Naturally, the view of the river and the Old Town from there is excellent, and the bridge itself has been declared a Heritage Site by IGESPAR.

A stroll through the alleys of the historic centre

The historic centre of any city is always its strong point and Porto is no exception. There you will wander through its medieval streets feeling like you are in another era and you will understand why it has been a Heritage Site since 1996. As you stroll around, you will find monuments and sights from the medieval era, as well as from the modern one, that will set your digital… on fire. Among the major attractions in the area, you’ll find the Church of St. Francis, one of Porto’s most exquisite examples of Gothic architecture, the city’s Cathedral, Praça da Ribeira, the small square in the heart of Ribeira, Porto’s oldest neighbourhood, where the Cais da Ribeira pedestrian street along the river begins, the National Theatre of S. Joao, the Casa do Infante or the House of the Prince and a host of other attractions that you will discover every minute.

Get to know the modern side of the

The medieval streets certainly make their own atmosphere, but Porto is not all about baroque churches and imposing buildings. It has its modern side too, which you’ll find in Gaia, where you’ll find the city’s Concert Hall, El Corte Inglés shopping centre to do your shopping and plenty of people eager to help and guide you.

Relaxing in the Parque da Cidade

Porto’s green lung, with 83 hectares of greenery, hiking trails and plenty of sports equipment, is without a doubt the Parque da Cidade, the city’s largest park. If you want to relax from the rhythms of the city, there you will find almost 10 kilometres of trails, lush nature and animals, grabbing a good opportunity to relax and enjoy life!

In the city centre, Allied Avenue is the most characteristic street, designed by architect Alvaro Siza Vieira and has its own distinctive tone. It starts from the Town Hall, where you will also see an impressive 70-metre bell tower, and ends at Praca da Liberdade, which has its roots in the early 18th century. Naturally, cafés and restaurants are there in abundance.

Porto is famous for its wine, which is divided into 3 categories, White White Port, Red Ruby Port and Tawny Port, made from red grapes and aged in oak barrels. The Vintage Port is perhaps the most important wine, produced 3 times in 10 years and to enjoy all of the above, you should explore the wine bars in the city, in Baixa, Ribeira and so on.

For a taste of Portuguese flavours from the… well, go for Flor dos Congregados, with prices ranging from 8-16 euros for mains. A good choice for local cuisine is also DOP at Palácio das Artes with creative dishes and a tasting menu at 65 euros. At Rota do Cha you can also have a tasty coffee and enjoy various snacks – don’t miss the vegetable empanadas, while for more… gourmet situations, Pedro Lemos, with 2 Michelin stars, will satisfy you if you can afford between 55 and 90 euros for a 3 to 7 course meal. And if you’re not lucky enough to catch the famous Portuguese fado at an impromptu gig, then combine this melancholic local music with your food at O fado.

Starting on a budget, at the Xango hostel, a 5-minute walk from Porto’s Marquês metro station, you can stay for 26 euros a night. The Residencial Borsalino, 10 minutes from the same station, is also a budget option at 30 euros a night, and if you can afford more, the beautiful guesthouse, Hotel Mira D’Aire, centrally located, offers 24-hour reception and a hearty breakfast with local produce, from 58 euros a night. For modern rooms with contemporary décor and breakfast, Eurostars Heroismo is a 1-minute walk from the station of the same name and will cost from 80 euros a night.

Porto Airport, also known as Francisco Sá Carneiro Airport (OPO), is a major international airport in Portugal and the country’s second biggest. It’s 11.9 kilometers away on the city’s south side, and the cab journey should take no more than 20 minutes assuming there’s no traffic on the route. The city and the airport are connected by a major highway.

Because Porto Airport (OPO) may be extremely crowded at certain times of the year, waiting for a cab after a lengthy trip might be a problem. Furthermore, not only are street taxis more expensive, but they may also charge you additional fees based on your luggage or other criteria. If you pick porto airport taxi, we will provide you with the most comfortable and pleasant mode of transportation to Porto city at no additional cost.